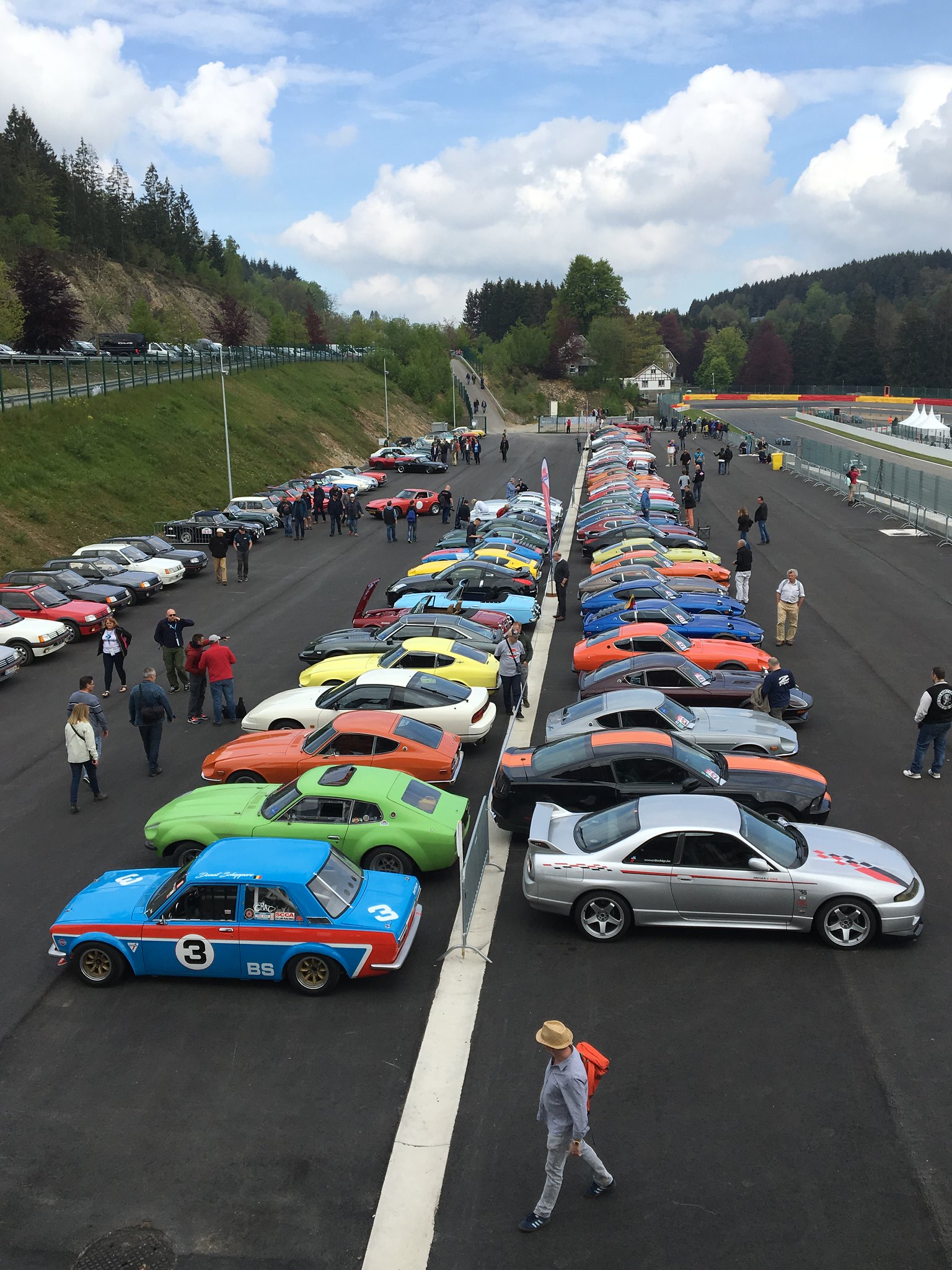 The 50 year celebration of the Z organised by Club Datsun France offered a great opportunity to make a first visit to the Spa Classic.  My turbo L28 engined 240Z has been a little unpredictable over last couple of years but finding RAC euro cover at a reasonable rate made my mind up this would be the car to take on the trip.

I made the long journey over to Kent on the Wednesday afternoon and met up with Mike who was also staying at the same hotel having arrived a little earlier in his Silver 240Z.

The following morning we met up with the other Z Club boys as planned in the hotel car park. John Palmer was first to arrive in his silver grey 240Z on ITBs with Matt Bannister for company. Shortly afterwards Woody and his Dad arrived in their immaculate 918 orange 240Z. We set off on the short drive down the M20 to the Eurotunnel terminal where we met up with Jon Billings in his red 260Z with his friend Rupert. Excitement was in the air, the sun was shining and our initial five car Z Club convoy was underway.

The first stop once over the channel was at Jabbeke services to pick up Tony our sixth and final convoy member who had travelled overnight on the ferry from Hull in his 918 orange 240Z. We did our best to keep together on the busy Belgian motorways, quite a challenge at times with the erratic driving standards of the locals.

Tony, a seasoned veteran of Spa had promised us some great mountain driving roads through the Ardennes forest towards the end of the journey. He was heading the convoy and soon racing ahead at high speeds with swift overtaking moves made past a tractor and line of cars followed by a large quarry truck. Unfortunately everyone else remained stuck behind the truck for some time and Tony was long gone. Once it turned off it was time for the rest of us to enjoy the road again with some spirited driving.

However, just a few miles later on we came across Tony stranded at the side of the road, he had pushed his poor Z too far. We all pulled over to assess the damage and he decided to drive gently for the remaining 15 miles or so to our destination. For the first few miles, with a sense of duty, we followed him slowly. Soon enough the lure of the fast twisty road was too much for Woody and he opened up the taps and blasted past. I sat behind Tony for a couple of minutes longer (one for all and all for one and all that) but finally (with Tony’s blessing) the urge to chase Woody down took over and I too was off followed by the others.

On arrival we reported to reception at the holiday park where we were staying I was given the keys to Room 101, I’m saying no more about this place but never was there was a more aptly numbered room.

We were up early and raring to go the next morning, Friday, the first day of the Spa Classic. As I went to start my car a loud shriek emanated from the alternator belt, I thought little of it other than the belt needed tightening and it could wait to be sorted.

Myself, John and Mike convoyed to the ticket office and then on to the circuit for the first day. On arrival I was taken aback at the stunning setting of the track in the heart of the Ardennes forest,. When you watch a race in on TV you don’t get an idea of gradients and just how steep the climb is from Eau Rouge up the Kemmel straight to Les Combes.

On the Datsun stand we were amongst the first cars to arrive and soon it filled up with cars from all over Europe, Lithuania, Latvia, Germany, Portugal, France, Belgium and Holland. The sense of camaraderie between us all was fantastic.

One of the main attractions of the S30Z range for me is that you will never see two cars the same, all will be slightly different whether wheels, mirrors, spoilers etc and this is fully evidenced when you see so many cars lined up in one place.

With full access allowed into the pit area we wandered over to see some fantastic machinery close up, the Group C Historic Endurance cars making an almighty noise as they warmed up for their qualifying session in the pit lane.

Friday is traditionally the quieter day of the weekend and for those with track time booked, it turned out to be the better day by far. Later in the afternoon John went out and managed to get 9 or 10 laps at a decent pace although he was maybe held up a bit by two old barge Beemers who were slightly quicker on the straights. Sylvain announced his intentions with a burn out from the stand and promptly gave his Rebello engined Z a good thrashing around the track making a glorious sound.

Meanwhile my loose alternator belt turned out to be something a bit more serious, the alternator is not Nissan but a GM conversion (popular in the States – don’t ask) and we could see that it was way too loose, maybe a bracket had broken off. We made a temporary repair by relocating two bonnet fixing bolts to the alternator and tying a steel cable tie between the two. It wasn’t perfect but at least the alternator wasn’t going to fall off.

Late afternoon saw a car arrive that had both me and John drooling, could it be a Singer 911? On closer inspection it turned out to be a restomod  from a company in Yorkshire. The stance, the colour and the last of the line 993 air cooled engines made it a car that both of us would have briefly considered taking home instead of our Z.

That evening most of us went out to Stavelot which has an attractive old town centre with cobbled streets where we found a nice brasserie/bar. Great amusement was had when Mike and Matt’s chosen dish arrived. Maybe something lost in translation but it was steak tartare and looked like a raw hamburger. The look on Mike’s face said it all and he was mighty relieved to be offered a ‘proper’ steak instead whilst Matt perhaps not wanting to lose face decided to eat his anyway. Top respect. I always like to try to the local beer when travelling and the ‘Leffe’ blonde beer went down well with all of us.

On Saturday there were more cars on the Datsun stand than the previous day, I would say perhaps 75/80 cars in total of which I counted around 55 or so S30Zs.

We decided that a proper walk around the temporary marquee tent shelters housing most of the classic racing cars was in order and it was fascinating to get a close up view of the preparation as the cars were readied for their big race.

On closer inspection of my alternator we discovered the bottom fixing bolt had sheared off. Finding a metric replacement would have been a doddle, but thanks to the good old boys at Atlanta Racing in Georgia who built the engine in my car, the original M8 thread was now 3/8 UNC spec. Earlier in the day, John and myself had been speaking to some English mechanics working on a 60’s racing Elva. Against all odds they came up trumps and gave us the perfect bolt for our needs.

Later on, John managed to blag a free track session from a guy whose water pump had failed so he couldn’t take part in return for a ride as his passenger. Woody was also running in one of these sessions. Unfortunately both were mostly run behind a safety car prior and then red flagged before they really got going. Too many cars on the track at one time, all of varying performance and driver abilities. The resulting chaos was entirely predictable.

Sunday the day of the parade lap we had all been looking forward to arrived. I decided that being towards the back may give a better chance of creating more space on track and a clearer run, so it proved. With plenty of turbo boost on hand I managed to overtake the first three or four cars in front of me in short order and then remarkably by pure good fortune and timing I found a pretty clear track ahead for most of my lap. I didn’t go too mad but some decent speeds were reached in parts. All too soon it was over, the end of the main straight appeared, a right hander into La Source and then we were marshalled back in just as we were getting into things, always the way with parade laps.

With the weather looking a bit miserable and heavy thunderstorms and rain due by mid-afternoon, we decided to get off home early. Mike went off first wanting a slower more relaxed run back at his own pace whilst myself, John and Jon convoyed back together to Calais with little drama or fuss along the way.

Back in the UK I got home to Devon in around four hours which meant an overall drive of around nine hours home from Spa all in one go with a couple of stops along the way. 1060 miles completed successfully, the Turbo Z had truly excelled itself and is back in pole position as the favoured son, for now anyway.

A big thanks is due to Sylvain and Club Datsun France for organising the meet up. A great time was had by all with many of us vowing to do it all again soon.