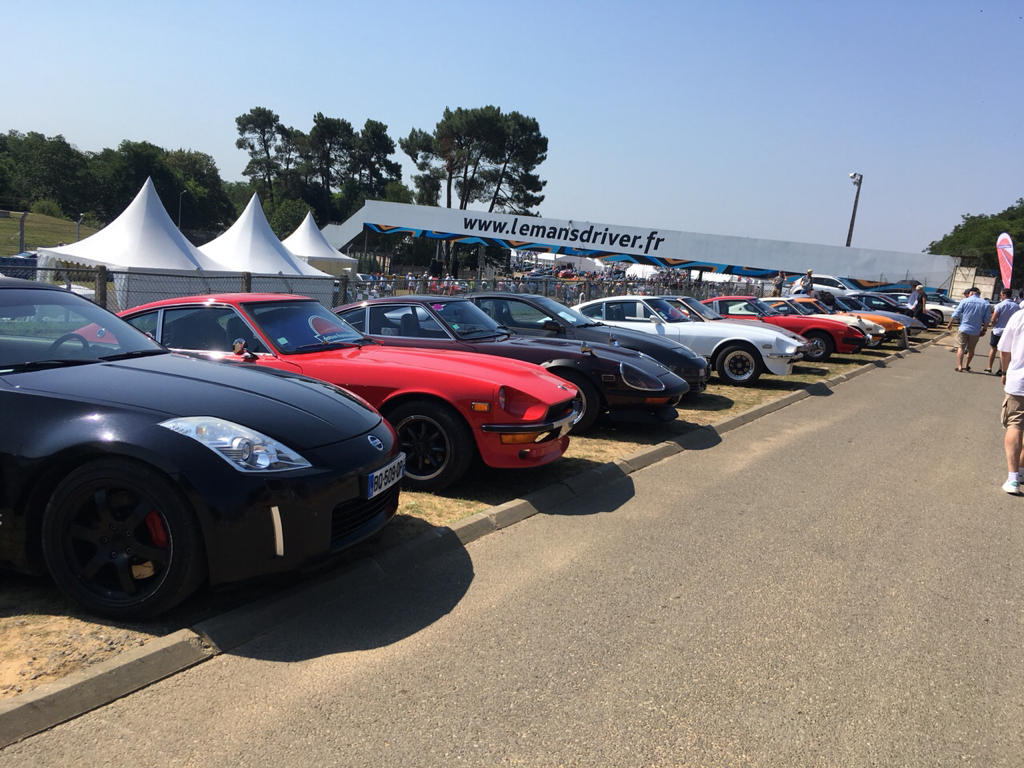 My Le Mans 2018 journey started this year on Thursday with the arrival Mick who is the vocalist in one of the rock bands I play in coming round, we loaded the Zed up and headed off down the M11 from Stansted in rush hour traffic. We’d given JohnyMD a bell and he caught us up on the M20 in his Toyota V8-powered Zed which is a nice bit of kit! We had a quick stop for some breakfast and then carried on to the Channel Tunnel crossing, passing lots of old cars and newish metal on the way. Unfortunately the train was delayed but it did leave plenty of time for us to have a chinwag with a few of the other car owners until we eventually got on.

However as we disembarked – tragedy! A piece of metal that was sticking up damaged the exhaust. 40 mins of work later in a garage and we were back on our travels thanks to Mick. The weather was stonking hot but the cars coped with ease, cruising at between 65-85 mph. We overtook plenty in the Zeds and got plenty of waves and acknowledgement by the other petrol heads. Eventually we got to the chateau, pitched up our tents and cracked open the beers. Jake RAH and Tim W arrived, so we cracked open more beer in celebration ( I like beer). After Jake and Tim pitched up, we all had some food (and more beer). Chris Vega had been due to join us but had to change his plans to arrive the next day. 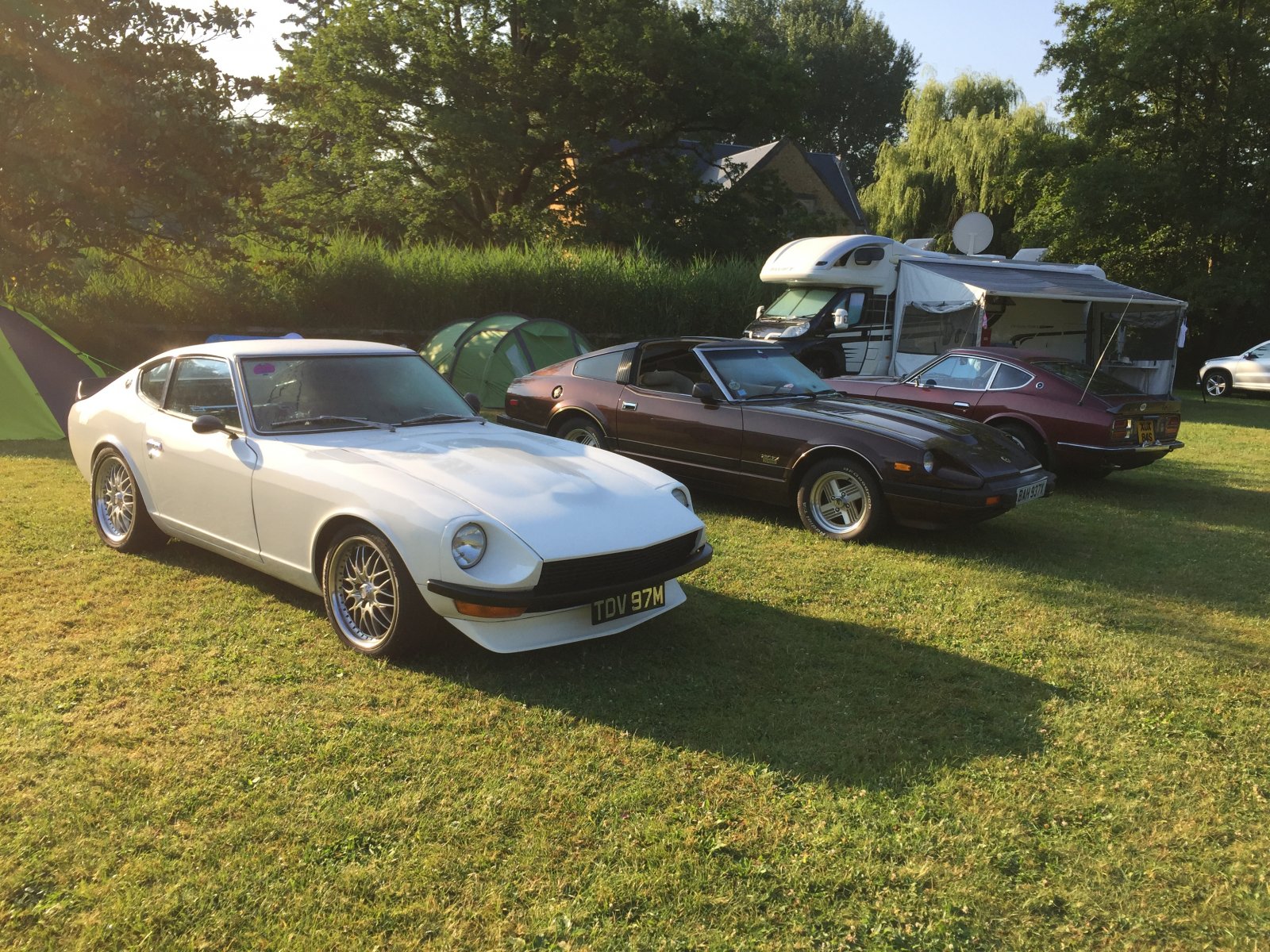 On the Friday morning we went to the track and the Z stand which Sean Dezart had organised (what a guy). Unfortunately Sean was at work but there were a good number of Zeds there. We went for a walk round, watched some racing, then the drama started! While I was trying to get the Zed over a kerb, I was on almost full lock with my spring compressed and CRACK – I’d broken the front spoiler. Then we heard a nasty scrape and Jake had caught his exhaust – fortunately Mick fixed it so all was good. 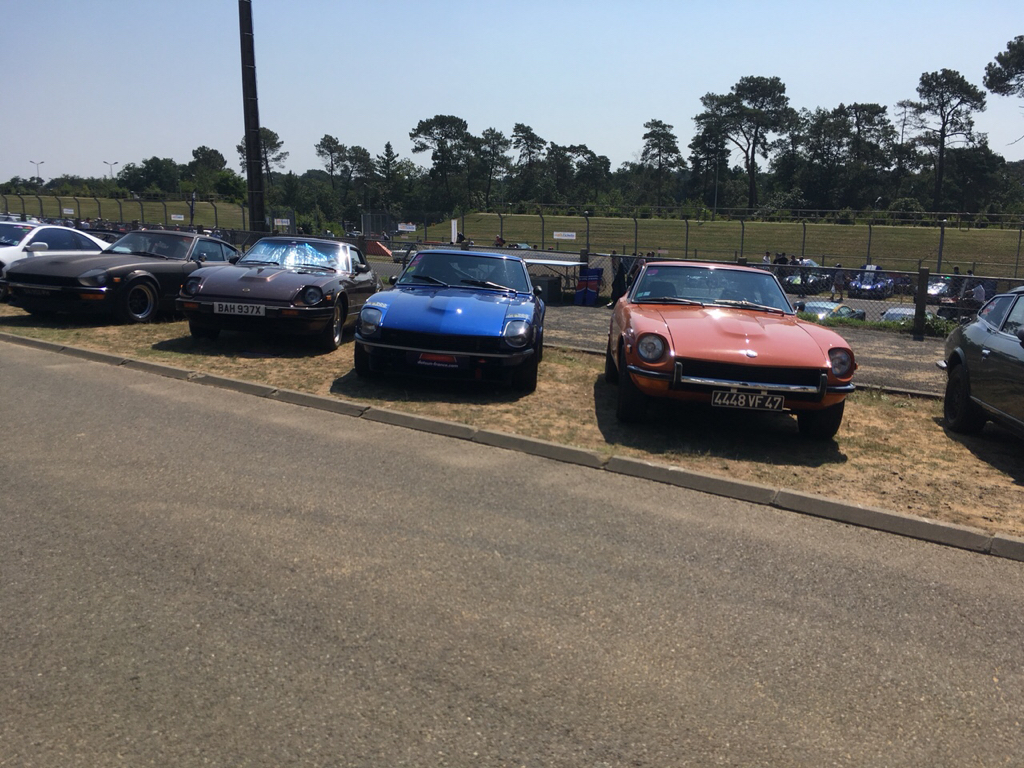 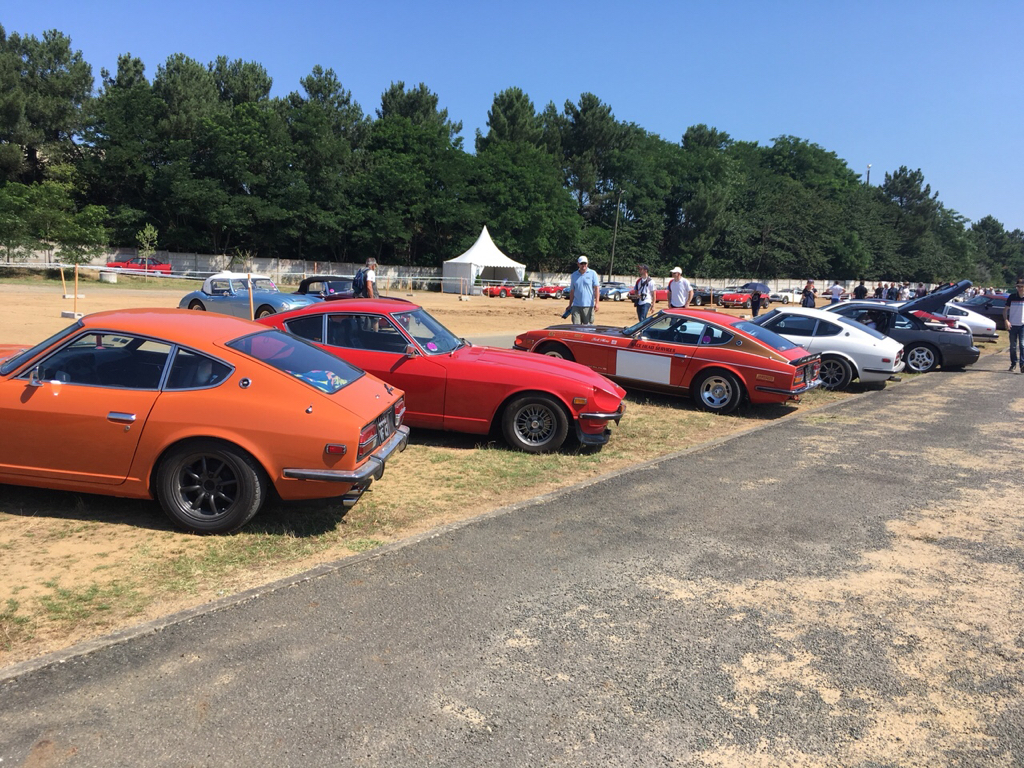 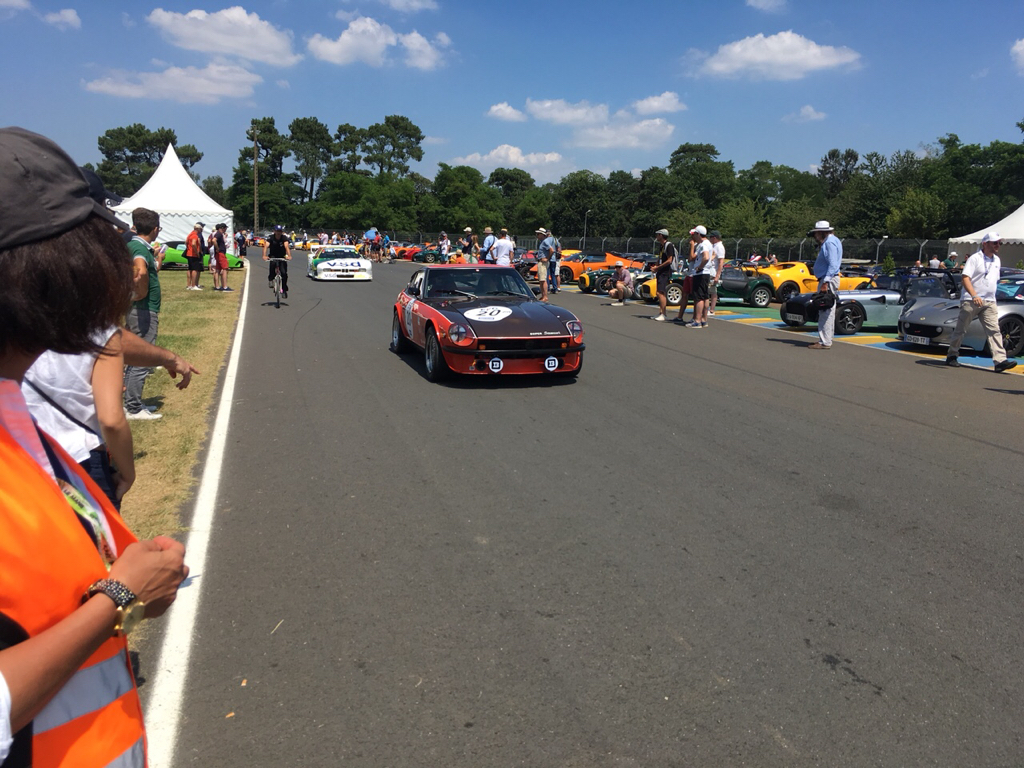 Back to camp, Chris eventually turned up and we we had more beers as he was sorting his tent out. Due to the heat and Mick nearly fainting at the track yesterday, we decided not to go during the day on Saturday and we sat around drinking instead. We went to the track Saturday evening and after a bit of racing and food we we tried to find Sean but none of us thought to bring his number with us, I blame Tim for that as he seemed like the sensible one out of all of us! Defeated, we went back to camp and had some more beer. 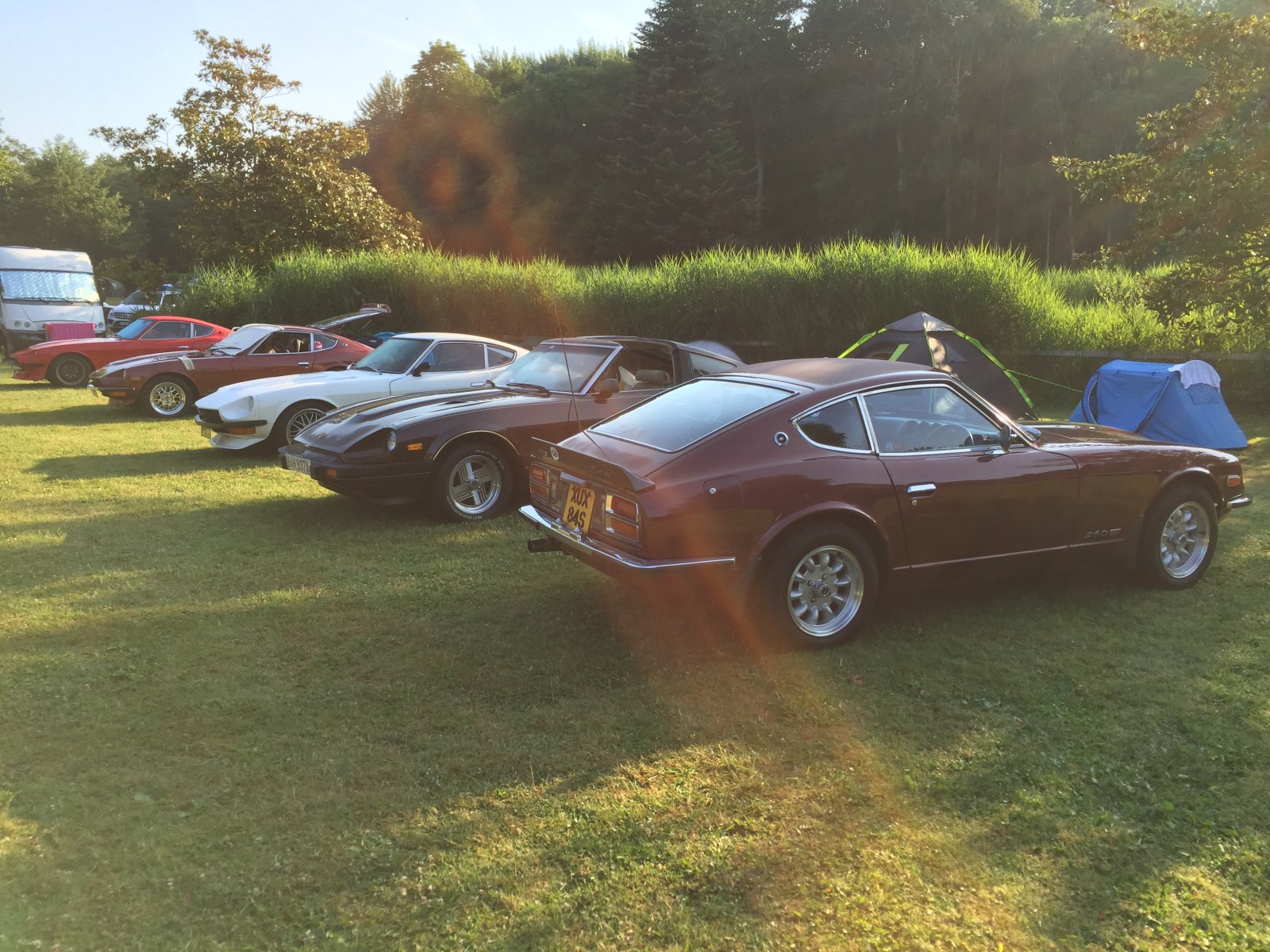 Sunday arrived and it was time to set off for home, we got to the Channel Tunnel crossing and were delayed for over an hour waiting to get on the train. On top of that, as I drove on to the carriage – Bang! The Zed gets stuck between the platform and train. The exhaust had been hit good and proper this time which made the train even more delayed. We were sent down the front of the train to reverse the Zed on to our own carriage. Whilst under the English Channel, Mick and I managed to bang it back into the manifold and it made it less than a mile from home before it started to scrape again. I’d also managed to somehow damage the windscreen, so the Zed ended the trip with a few battle scars but it never let us down.

Reflecting on the trip, I visited LeMans ten years ago and the modern cars looked out of place but it has really improved, lots more to do and see and the modern and old metal go well together – roll on 2020!

Samuri Gathering VI
A weekend at the Nürburgring
To Top