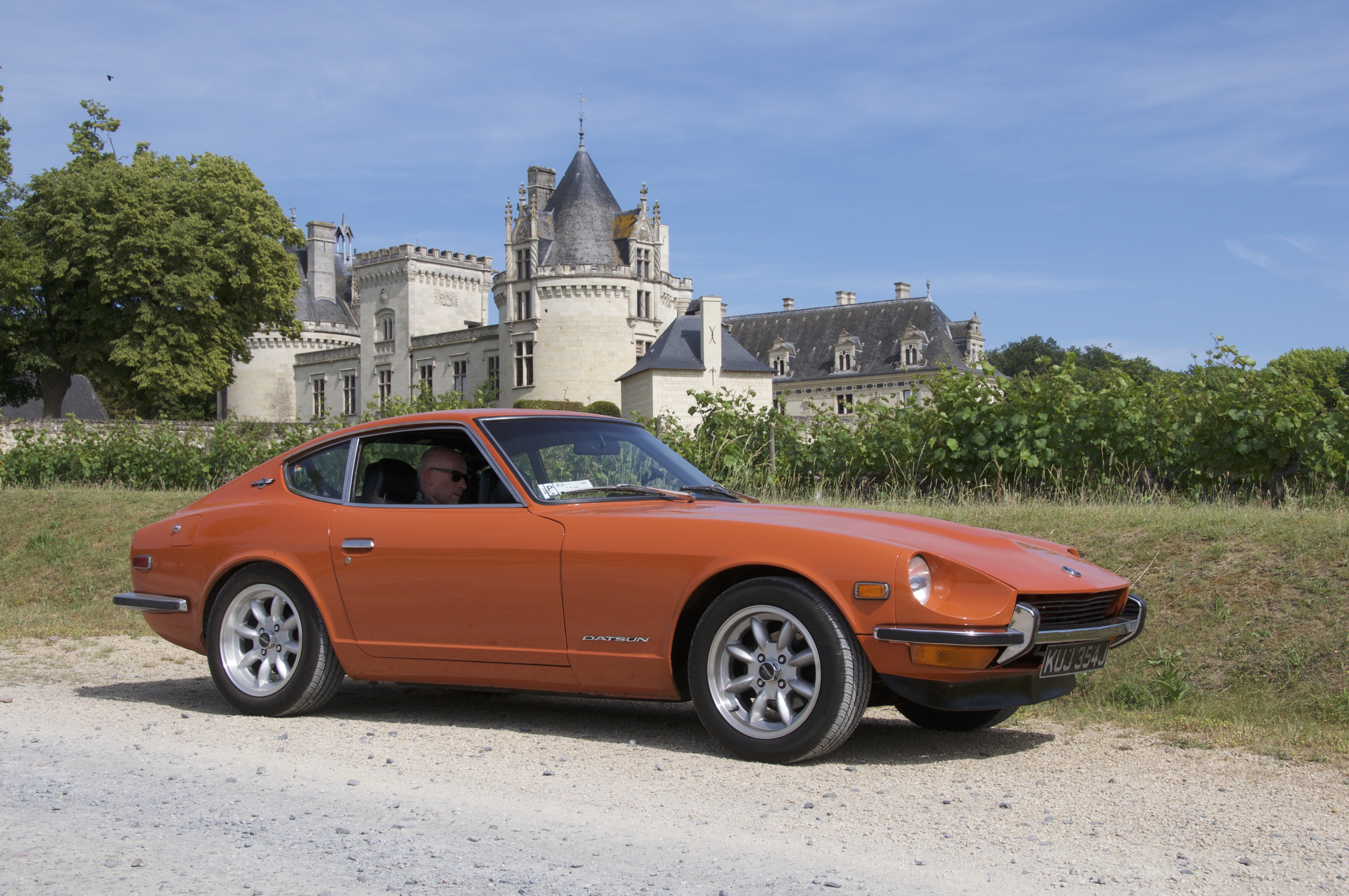 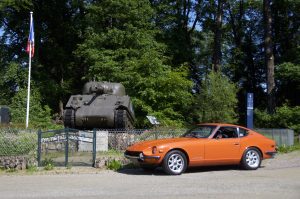 The start of our journey, D-Day – we decided for better or worse that we didn’t want to purchase EU Breakdown cover given the cost for a five day period and arrogantly thought what could go wrong with a 47 year old Japanese classic sports car driving several hundred miles to France and back with a fresh top end engine rebuild! The usual gear, some spares, basic tools and a tow rope packed and off we went. We got the Ferry from Portsmouth on Wednesday morning going across to Caen in order that we could catch the last free practice and first qualifying session for the race. With the weather set for scorching heat the Z has no worries over seeing any water.

Deciding we had the time we drove some of my favourite roads down to Le Mans sticking clear of all payage using A and B roads even going through the Forest D’Ecouves Normandie which is always great fun. Having warmed her up the new engine was now pulling like a train leaving me grinning like an idiot as we raced down towards the circuit. Given the cars relative low capabilities/threshold in its very OEM guise its was hilarious fun rolling around going pedal to the metal so to speak. I’d forgotten how much fun it is to drive a slow car fast, albeit it has only served to increase my desire to perform several major upgrades. 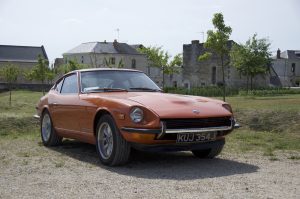 Having made it down to the circuit we settled in at Auberge Des Hunaudieres restaurant to catch the end of the GT3 session before the final practice begun. With the car parked in sight from our table we giggled to each other as we saw the amount of passers by who stopped to have a good gawp and admire the car while we enjoyed our meal and the racing. All that done we did something different for the Thursday and left the comfort of the circuit to head South and check out Chateau de Breze which has the largest dry moat in Europe being 18 meters deep and an impressive cave system, enjoying some fantastic roads on the way down it was also easy to spot the Roman influence with dead straight roads for mile on mile (if that floats your boat). On route back we met up with our neighbour who was on his first trip out in his R35 GTR. Its fair to say together they made quite a sight and drew some looks albeit for road presence and performance despite my admirable efforts to drive in a spirited fashion would never come close to Godzilla’s potential.

For a change we also decided to attend the Classic British Welcome which we’d never done before, it’s been going for several years now and draws about 1000 cars of all varieties and ages to a small village local to Le Mans. There was a fantastic turnout with almost anything you could imagine in attendance with the theme this year being Marcos. Thanks to Sean Dezart I met up with a French 240Z owner who spoke fantastic English and had a good chat to him about his car and had a good poke around, it was in fantastic condition and right up my street being a practical road legal racecar 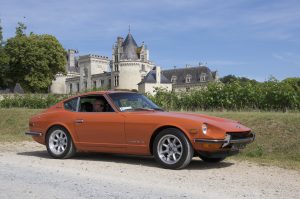 Everything was going well and I wish it stayed that way however his is the point where I say ‘but’. While getting back to the car and preparing to head to the circuit for the pit walk I was chatting to another passer-by who asked to have a look at the engine bay. In my typical fashion I went to oblige pulling the bonnet release however a second later I was pulling a very screwed up confused face as I was holding the handle in my hand with about 40cm of cable visible and the engine bay sealed shut. Having realised there was nothing I could do I instantly got several very helpful responses from the usual suspects on Facebook following my pleas for help including the offer of tools and help from a fellow member at a local campsite

On reflection though we concluded that there was no real need to access the bay with everything running well that we’d just leave it well alone for the weekend and worry when we got home and had better access and a cold engine to faff with given we had no guaranteed way to fix it even if we opened it up.

Several more days of racing went by with visits to other favourite locations such as Hotel de France in Chartre-sur-le-Loir where despite other tasty machinery being parked with the GTR and Z parked together drew a lot of looks and sparked more chats. The car continued to perform very nicely chewing through the miles well into Sunday afternoon as we were returning to Caen for our return crossing following the race. As we made swift progress through the French countryside it was apparent while slowing down to pass through towns that we were smelling a sulphur/bad eggs smell. 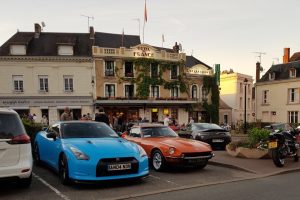 Quite apparent it wasn’t going anywhere and some scanning over our notoriously ‘reliable’ gauges and it was clear that the Amp gauge was up at maximum +45. Some discussion later and we concluded the voltage regulator had decided it was the end of its days and to give up. Given we were still ticking over nicely and there was little we could do (assuming we were correct) we opted to continue making progress for Caen. The car kept eating up the miles all the way to our obligatory stop in the Wine cave before shooting the last few hundred meters into the Ferry terminal. Having pulled up in the usual queue we made for our usual beer to relax and ponder the machinery and kick tyres with all the other brits waiting alongside.

With the queue starting to move we had to stop chit chatting and jumped into go, a quick turn of the key and nothing….. stone dead nothing… No problem we thought a quick bump start and we’ll be away, no such chance with several of us pushing not even a hint in first or second gear. Pushed to the side several brits seeing our predicament kindly came over offering a battery charger and jump leads. Alas our trivial bonnet being locked was suddenly a big issue! A few discussions with the port authority and having been told we couldn’t be towed with cars having to make their own way to the boat and no tow hook fitted our options were looking thin on the ground….

Several conversations later and that annoying tow rope was suddenly looking very appealing. Having fitted it around the front subframe/cross member we had a big rig turn up with two kind French men from the port. A lot of stress and some giggling later and we had been towed to the back of the ferry, literally being the last car pushed down the ramp onto the boat before departure. Disaster averted the AA were on standby for our arrival back in the UK, the next day having watched every vehicle possible disembark little old us were left in the corner awaiting the ports recovery rig. Not so expected was the jobs worth who arrived refusing to tow us off of the boat on the basis we had no tow hook and he therefore he ‘couldn’t’ tow us. Much bullshit later the car got pushed off to await the AA. Immigration cleared with thanks to Portsmouth port authority we sat and awaited our man in yellow. Agreeing we were buggered we arranged for the car to get towed to Iain to get the car on a high lift to get some decent access. 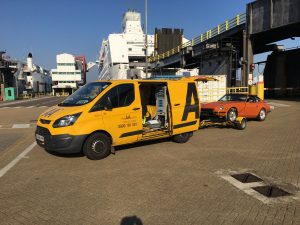 All arranged we drove not so tastefully on the back of an AA van to West Sussex to be cracked open and analysed before heading back to work as originally planned. By the afternoon our broken bonnet release cable and knackered voltage regulator both confirmed we set about with repair options. Looking to bring the car slightly further into the 21st century we’ve opted to move onto an internally regulated 280zx alternator for hopefully some more reliability. New battery to be sourced and bonnet release cable on route repairs are well underway meaning she should be back on the road in no time.

All ranting aside one day soon I plan to be performing some work by choice which I would like to be do as an ‘improvement’ rather than our usual list of essential areas of attention. Suspension is well and truly on the cards with hopefully some T3 components in the pipeline while other items are sourced including the dreaded conversation of suspension struts. I’m watching a few threads with interest however having chatted with Franky Intrax sounds like a very nice option if I can stretch to the costs.

Other than the minor episode which I now look back and laugh at the car performed faultlessly on its first ever trip to the continent eating up the miles and is hopefully the first of many trips planned over there. I’ll never get bored of saying that I am still blown away by the help I’ve got through the community across our ownership of the car, I still giggle to myself when I see the attention the car gets and love sharing my experience with all of the people I’ve encountered since day one of owning the car. I’m not sure this one will ever get boring…..

I really have now said far too much so I’ll leave you with another picture from France in the meantime rather than listening to me drone on! 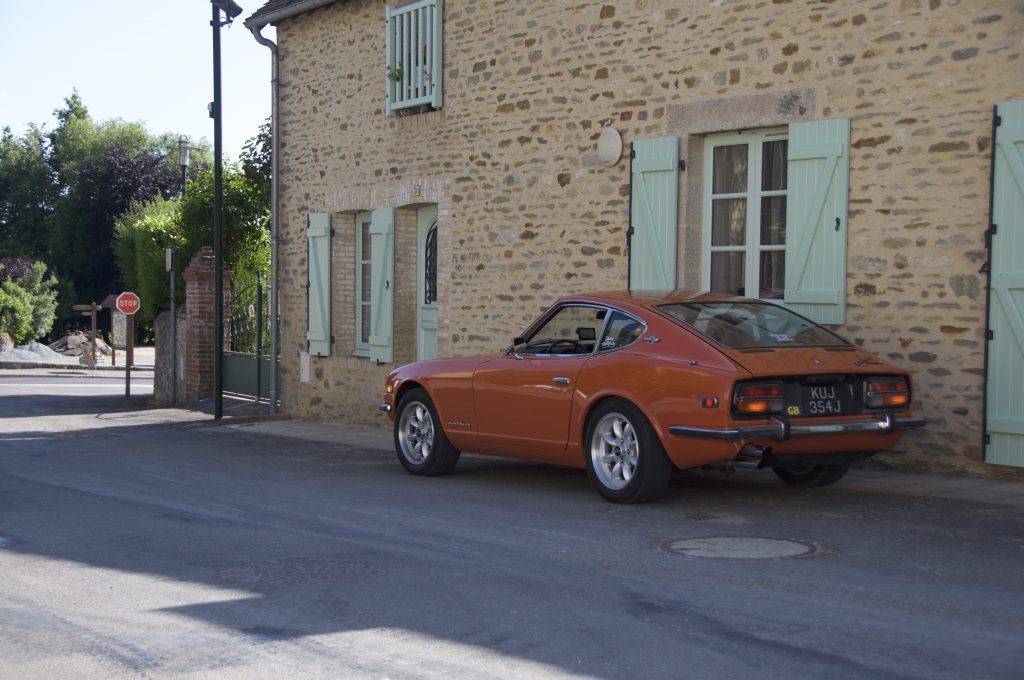